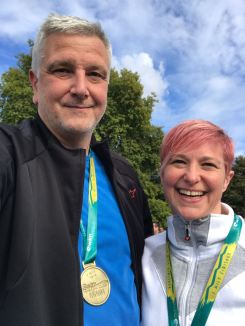 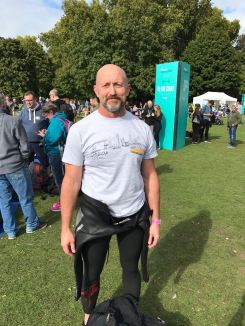 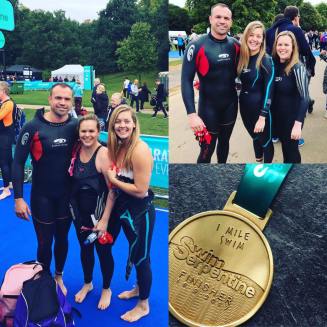 Sally in her first open water event since her daughter Rosina was born back in April placed 9th in her age group, with a time of 28:33 and ranking her 45th in the women’s race and 140th overall.

Gary swimming here for the first time also posted a pleasing time of 27:31 placing him 20th in the 35-44 age group and 67th in the men’s rankings.

Wendy Hunter placed 7th in her age group and the 41st woman home with a time of 28:19. She also managed to finally get her partner Steve involved, though we have yet to convince him to join Romford Town Masters, yet….

Swim of the day for the mile however went to Michelle Curry who took 1st Place for the overall women’s race with a superb time of 21:49, which would have been strong enough to race with the elite women – maybe next year?! She was of course 1st in her age group and most impressively placed 7th in the overall results including the men.

Tom Enright took on the challenge of double the distance with the 2 mile swim, he swam a superb time of 50:51 and was 35th fastest overall in the men’s race and more importantly 2nd in the 55-64 year age group.

The elite men’s one mile race came down to a spectacular five-man sprint with the reigning World and Olympic open water swimming champion Ferry Weertman, from the Netherlands, just edging out 17 year old British swimmer Nathan Hughes from Hatfield by 1 second. Special mention here to Lewis Binning of Romford Town’s A squad with another excellent open water swim and finished in 11th place with a marvellous time of 18:42. He also beat GB’s Rio Olympian Jack Burnell by 7 seconds.

The Women’s elite race was won by Jazz Carlin, beating a classy field in a time of 18:45. Again another sterling performance from Romford’s A Squad swimmer Emily Milton who placed well in 14th in a time of 20:51.

This year’s Serpentine Swim has shown to be a really fun and rewarding event as you can tell from the photos and hopefully next year even more Romford Town swimmers will be competing in this great open water event.